August 27, 2014
We arrived at Liz and Alan’s Tarrytown (a small Austin community located west of downtown) home early in the morning. The air was humid and the sun was already beginning to peek through the trees. The house was set back from the street surrounded by a wooden fence. The modest home, built in 1937, is dwarfed by neighborhood expansion and remodels. It is certainly an area of great change and the sounds of saws and hammers could be heard up and down the street. Anyone living in Austin, or Texas for that matter, can envision the scene.

Upon walking up to the door we were greeted by Alan and Liz. They were warm, welcoming, smart and articulate individuals, the kind of people you could really enjoy spending time with. Both tenured professors at UT, they had lived in their modest 1450 sqft. home for the past 33 years. They had built their careers, family, and a life within the walls of their home and the patina of time showed a love of family, art, good food, and travel. It was almost as if the walls could attest to a life well lived.

A home is the most important building in someone’s life and Liz and Alan have invited us all on a unique journey into the process of building their new NATiVE net zero home. Yes, you get to witness it all, the demolition of their current home and the reconstruction of their new home which stands for the change that is sustainable for all of the growth and expansion that is hitting Austin and Texas. They are examples of doing it right. From stud walls to insulation, to tile and fixtures, they have welcomed us all into the private process of building their home. Stay tuned and we will send out occasional updates and newsletters, so keep your eyes peeled. So with pleasure, we introduce Liz and Alan, net zero heroes. 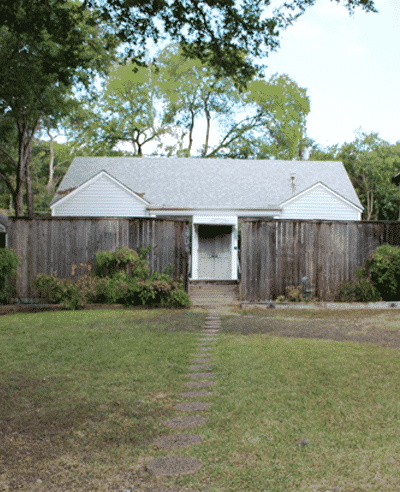 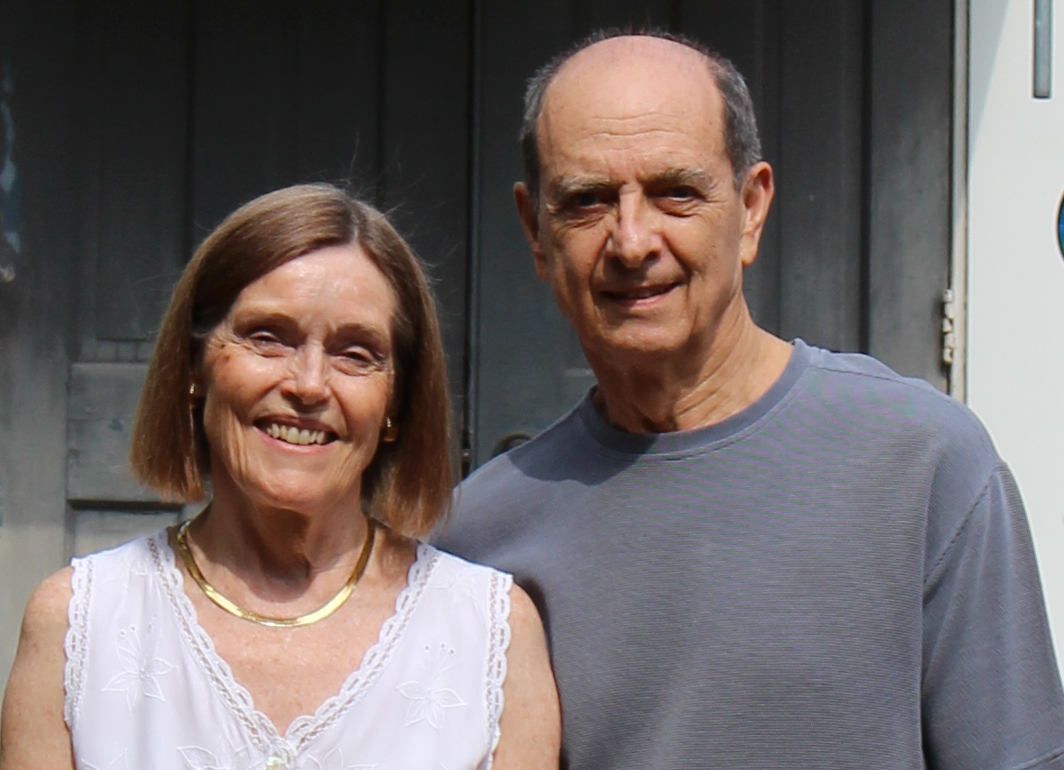 Tell us a bit about yourselves:

We are both long-time (very long-time) professors of English at the University of Texas at Austin and have one son together, Daniel, who attended UT and recently graduated from Yale Law School. Liz grew up in Trinidad, went to a convent boarding school in England, and got her undergraduate and graduate degrees from Oxford. She is still surprised (though not unhappy) to find herself living in Austin, Texas, and goes back to the UK as often as possible.

Alan is also a transplant, though from closer at hand: he comes from Brooklyn, New York, and his two sisters still live in the Northeast with their families. Daniel is the only real Texan in the immediate family, though he is proud of his EU passport.

Liz: Liz likes reading books, which is why she originally signed up to be an English professor: her idea of fun is trying to get undergraduates to share her love of literature. But she’s now the Chair of the English Department, and finds she likes administration almost as much: helping people build their careers, get teaching prizes, and enjoy their life in our Departmental community is deeply satisfying. When Liz is not working she is still reading books, teaching numerous graduate students, watching movies, going to the theatre, enjoying classical music, and, her favorite occupation of all, traveling both in America and abroad. She and Alan have been lucky enough to spend four separate semesters teaching in France and one in Galway, Ireland, while every year they go on a theatre binge in London, always accompanied by Daniel. One of Liz’s major pleasures is cooking real, healthy meals and sitting down with her family to eat them; Whole Foods Market alternates with Central Market as her gourmet mecca. Another daily pleasure is working out at UT’s magnificent Gregory Gym, although various creaky joints have recently curtailed the intensity of her exercise. Finally, the most important part of [both] our lives together has been watching Daniel grow up to be a martial arts black belt, a lover of Shakespeare and Milton, a Jane Austen fan, an actor who played Hamlet in UT’s Shakespeare at Winedale program, a world traveller who is bi-lingual in French and not bad at Chinese, and, most importantly, a kind, gentle, ethical, and thoughtful person who is concerned about those less fortunate than himself. Daniel has become our friend as much as our son, and we love spending time with him. He is coming with us to spend a year England (yes, we both have research leaves, and will be watching our house grow from afar); while we are busy writing our books he will be doing an MA in Sinology at the University of London.

Alan: Specializes in modern British, Irish, and American literature, the novel, and Shakespearean drama. He has authored five critical studies and edited a dozen other books and journal issues. He has directed Plan II (UT’s university-wide honors program); chaired both the Faculty Senate and Faculty Council; coordinated the annual residency program, Actors From The London Stage AFTLS; directed the student organization, Spirit of Shakespeare, which supports the residency and performs scenes from the annual AFTLS play; founded and directed the English Department’s Oxford Summer Program; received Plan II’s Chad Oliver Teaching Award and the President’s Associates Teaching Excellence Award, as well as UT’s Civitatis Award conferred annually “upon a member of the faculty in recognition of dedicated and meritorious service to the University above and beyond the regular expectations of teaching, research, and writing.” He is an avid squash player (though “temporarily” sidelined with back problems), a dedicated exerciser (including Pilates), theater and film aficionado, foreign traveler, and amateur environmentalist. He has three children (and four grandchildren) from his first marriage, one of whom lives in Austin and will help to oversee the construction of the new house.

How did you find Native and why did you choose them as a contractor?

Liz was browsing “green” builders on line, and was attracted by the stylish contemporary but not over-the-top houses shown in their portfolio. We were both drawn to their philosophy and values concerning energy and the environment. The website caught our attention; then we met Eddie, whose charm and enthusiasm sold us completely. We felt as though he shared our concerns about climate change and understood the ethics as well as the money-saving aspects of green building. We never considered another contractor, and did not comparison-shop. It just felt right. Eddie introduced us to our architect, Elliot Johnson, who graciously put up with our opinionated views and ultimately produced not one but two brilliant designs, that satisfied all our desires. When we encountered unforeseen problems that made a second design imperative, both Eddie and Elliot remained patient, optimistic and positive. When we originally chose Native we had not met our fantastic designer Jackie Burke, but she has been a major part of our satisfaction with the experience so far.

What was your internal motivation to build a net zero energy home?

Concern for the planet and its rapidly diminishing resources; a desire that it remain livable for those who come after us. Alan believes strongly that his grandchildren are a huge investment in the future. What sort of world will these kids inherit? Texas in particular seems likely to become a semi-desert, but it has plenty of the most powerful renewable resource, sunshine. We drive a Prius and are thinking of getting an electric car next year: to run the car off the solar array is a dream of ours. We can’t understand why Austin hasn’t made an even bigger investment in solar energy. 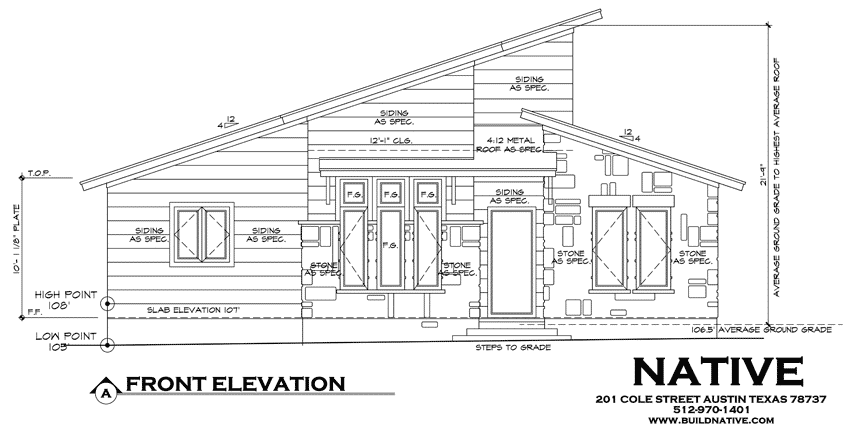 What are you most excited about with the project?

Going green is the most exciting thing. I can’t wait to monitor our energy use: can you hypermile a house? I am also looking forward to getting rid of our scruffy lawn (we never water: a convenient combination of environmentalism and sloth) and replacing it with a Xeriscaped yard: that will add to the greenness. Texas doesn’t have enough water for lawns. In addition, the prospect of a new house that isn’t falling down around our ears is pretty thrilling. No more raccoons in the attic (we hope); more than one tiny ugly bathroom; enough storage space and a real walk-in closet; tall ceilings; no more ratty carpet but a lovely maple floor; room for visitors; a cool and elegant interior and a drop-dead gorgeous kitchen. Plus, we are in this for the long haul: the house is ADA compliant and will accommodate a wheelchair if we’re ever in one, and there are grab bars all over the place.

What advice would you give people who are looking to build a net zero home?

Talk to Native first! We were idealistic but a bit naive about what green building actually means, and what is practical within a moderate budget like ours. We had a lot to learn about realistic choices (geo-thermal turned out to be too expensive and rainwater harvesting not practical for us), building materials, insulation, where our solar panels would have to go, and what kind of water heater to buy (we chose an electric air heat pump). Eddie helped us figure out these choices very early in the process. We would also advise anyone in an older neighborhood like ours to check for old but possibly enforceable deed restrictions before the architect gets to work.

*Stay Tuned: This is Part 1 of a multi-part story on Liz & Alan’s Journey into the Process of Building Their New NATiVE Net Zero Home 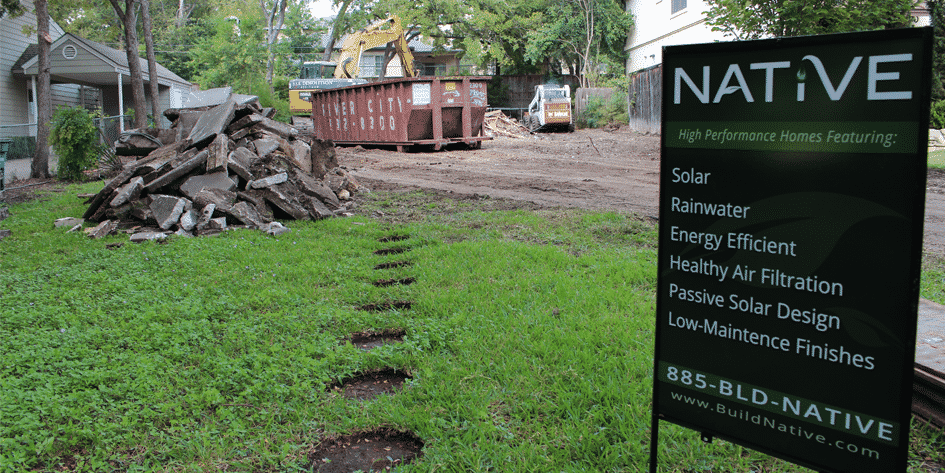